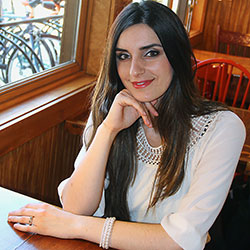 Fatljume “Lume” traveled to America to be with her new husband where he grew up in Monroe, Wisconsin. The Swiss Cheese Capital of the USA was a long way from her village of Zajaz in Macedonia. She was in love, though, newly married and ready to make the Midwest her home.

Lume grew up in the same village as her husband’s parents, and they met when he and his family spent the summer there. They were married and in 2011, Lume challenged herself with life in a new country.  “It was definitely really scary. My life was changed. I changed the food. I changed the language. I was raised in a totally different system. I was lost. I was totally lost,” she recalled.

Lume came to America knowing a little bit of English. Her teachers back home taught her some English grammar, but they spoke in their native Albanian most of the time. Immersing herself in Monroe was not easy.

“When I came to America, people were talking very fast, and even with the little bit of English I did know from Europe, I felt like I didn’t know anything at all,” Lume said. “I didn’t understand the cashier at the store. Everyone talked very fast and I couldn’t catch what they were trying to say.”

With her husband’s help, she found literacy classes in the Monroe area. Though not perfect, her English improved during her time in Monroe.  She could communicate but she still was hindered at getting a job. And knowing one day she would have children, she wanted to be able to talk to them and help them in English.

A couple years later, Lume and her husband relocated to Milwaukee. There they found Literacy Services of Wisconsin, where Lume started ELL (English Language Learning) classes in April of 2013; with the one-on-one model, her English skills thrived.

“How am I going to teach our kids if I don’t know how to read or write?”

Her English improved every day and, two months after coming to LSW, she found a job in retail. By August of the same year, she enrolled in a one-year program at Milwaukee Area Technical College. And in May of 2014, she graduated with honors receiving a technical diploma in the optician vision care program. She also opened the 2014 MATC graduation ceremony, introducing speakers to the audience, as her parents looked on. Her father knows English well, but her mother, who does not, was struck by Lume’s courage and new language abilities. Her mother said, “Oh, my God. You know how to talk English. You weren’t even afraid to talk in front of all of those people.”

Lume said, “I was also proud. From feeling like a nobody, I was now their somebody. I was opening the ceremony. It was a very big deal for me.”

That same year, Lume was recognized by Literacy Services as the 2014 ELL Student of Inspiration. 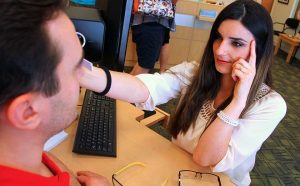 Lume and her husband recently relocated to Schaumburg, Illinois for another new job in another new community. And hopefully, with her strengthened English skills, more new opportunities.

Lume’s life was changed by LSW’s one-on-one tutoring that helped her in school, in work, and in life. Now she wants to help others change their lives, too, by tutoring beginners to the English language. “I’m trying to give it back to someone else who needs it,” Lume said. “I’m going to appreciate it more if I can return the favor.”