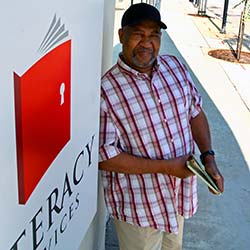 Bennie’s story is one of perseverance despite tremendous obstacles. As the oldest of ten children, Bennie went to work on a Mississippi farm at the age of seven to help provide for his family. All too often, his father was too drunk to work, so it was up to Bennie to earn money. His younger siblings attended school while he worked, pulling in $1.25 a day – 50 cents of which went to the driver who took him to the farm and back.

Since young Bennie longed for an education, he made attempts to attend school whenever he didn’t have to work. But those experiences were few and far between, with predictably devastating results. “When I did go to school,” Bennie recalled, “I got whooped to death for not coming to school. If I wanted to go, I didn’t have anything to wear. My hair was just knotty, nappy. But then, you know, I was always the dummy.”

Bennie was 15 when he came to Wisconsin, after his father had moved north a few years earlier for work. Bennie’s well-meaning aunt enrolled him in school, but once again his desire to learn was thwarted; he was far behind his peers and placed in a grade with much younger children. Disheartened but ever determined, Bennie attempted to sneak into classes at North Division High School, but was soon discovered and ejected.

Eventually Bennie signed up for Job Corps, a government-run technical training and education program for young people. He got a job in a foundry where he worked for more than 16 years. But when a promotion to foreman revealed his illiteracy, he lost his job and succumbed to alcohol and drug addiction. What followed were years of addiction, homelessness, job losses, health problems, and eventually jail time.

“I’m amazed at how much my life has changed”

His stint in the criminal justice system connected him with a probation officer determined to help him kick the drug habit and get his life on track. He admitted to her that he thought his addiction would kill him, and recalled her response: “I can help you if you let me.”

In the months that followed, the probation officer treated Bennie strictly but fairly, sending him back to jail whenever he failed a drug test. The third time he was sent back, he pleaded for her help and swore to never use again. “I meant that from my heart,” said Bennie. “That’s how I quit. I said if she helped me get out I would not do it again. I didn’t do it any more. That  was it.” He even gave up drinking beer for fear that he might lose control and pick up drugs again. Instead, he joined Alcoholics Anonymous and eight years into the program, he was running the meetings.

After getting clean, Bennie knew it was time to follow his dream. “Deep down in my heart,” Bennie said, “I wanted to learn to read and write. That was my goal.” His probation officer helped him enroll at Literacy Services of Wisconsin in 2002, where he found compassionate staff and patient tutors who helped him learn what had eluded him for most of his life.

Bennie started the phonics program when it was introduced in 2008 and proved to be one of the most dedicated and diligent students, rarely missing a class despite numerous health complications. After several years of hard work and perseverance, Bennie completed the phonics program and began to work towards attaining his GED.

“I’m amazed at how much my life has changed,” Bennie said, noting confidence and self-esteem he never had before. He spends much of his free time lost in books now, and even helps his mother. 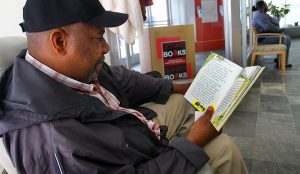 “My mother, she cannot read and write. I help her reading. I’m not the best but I’m getting there. I’m really proud of my own self. It’s just good.”

Three days a week, Bennie arrives early for class and sits in the lobby, reading a book and happily greeting all who enter. When asked about his determination, he credits his tutors: “They make me want to be here.” The feeling is mutual, as students like Bennie inspire tutors and students alike to continue pursuing their goals.