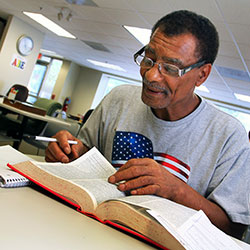 Frank never shied away from sharing that he couldn’t read or write. Like many students of Literacy Services, Frank had left school at a young age to work and help support his family. Though his illiteracy weighed heavily on him, Frank doubted that he could learn these skills after so many years of compensating for his fifth-grade education.

Frank left his Mississippi home at age 19, looking for work and an opportunity to start a new life. He secured work in Wisconsin but needed help from family and friends to make up for his lack of reading abilities. They assisted him with completing job applications, filling out doctor’s forms, and understanding instructions at work.

“If I needed to spell something out I would copy it from something else,” Frank recalled. “I would call someone to tell me how to spell the word and tell me what it meant. It was kind of difficult but it was a way of doing things.”

Those common coping methods worked for a while, but Frank still wanted to read and write. A co-worker told him about a place that could help him: Literacy Services of Wisconsin. Frank drove himself straight to the agency’s office and enrolled in basic education classes.

Although excited, Frank was skeptical that he could learn. “Still had this little doubt in my mind: ‘Is this going to work?’” he remembered. “I was overwhelmed with the way they did the one-on-one. That’s really what I was looking for.”

“courage enough to do something about their education”

Eventually, Frank connected with a tutor, Beverly Weeden, and together they accomplished what he doubted was possible: He learned to read. Frank’s progress was steady and methodical; as a beginner, it sometimes took him ninety minutes to finish three sentences. Over time, that increased to five sentences, then to paragraphs, and ultimately to pages.

“I was able to read like two, three pages, ask questions. It was getting exciting to be able to read that little bit,” Frank said. “I got pretty good at spelling. Some of the words, I didn’t know the meaning of them. [Bev] would have me look them up in the dictionary. That’s when it got really good to me, when I could look the words up in the dictionary on my own.”
As Frank advanced with reading and writing, his job advanced with technology. Manual operations moved to computerized systems where screens revealed words – lots of words – and required him to read. “It would have been impossible. I wouldn’t have been able to do it if I wouldn’t have been able to read,” he said of his job as a low-pressure machine operator.

Frank, now 65, is able to read information at company meetings and ask questions. He likes following the scripture in church. He enjoys books with his grandkids. He can go to the doctor’s office and fill out forms on his own. All of those things are possible now that Frank can read and write, and he doesn’t take them for granted.

And like the co-worker who informed him about LSW, Frank pays it forward by posting LSW’s information on the workplace bulletin board for others who struggle with literacy. He has seen some 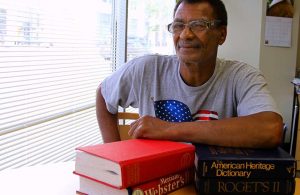 of his co-workers and their family members taking advantage of classes. “I saw a guy and his wife, some of the kids, all there,” Frank shared. “At least somebody had the courage enough to do something about their education.”

Frank mastered the basic education curriculum and transitioned to GED studies in 2011. He continues to study with Bev, his long-time tutor, and also Dick Krueger, with whom he has worked for several years. In his lessons, Frank’s writing is consistently positive, sometimes philosophical, and frequently acknowledges his sense of accomplishment.